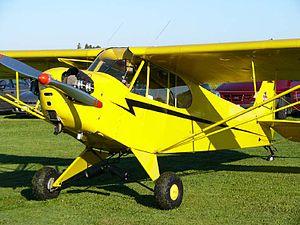 One of the most popular lightweight aircraft created was the Piper J-3 Cub, which offered simplicity and affordability.  Originally designed for flight training due to its tandem seating, the plane initially sold for $1,300 and was only available in one color – bright yellow trimmed in black.  The color became so synonymous with the plane that it came to be known as “Cub Yellow.”

The original prototype for the Piper J-3 was the Taylor E-2 Cub, built in 1930 by Taylor Aircraft in Pennsylvania, and named after investor, William T. Piper.  The lightweight aircraft had wings mounted high on the fuselage, an open cockpit and wooden wings.  However, on Sept. 12, 1930, a test flight of the lightweight aircraft ended when it ran out of runway as the 20-horsepower “Tiger Kitten” engine was not strong enough to raise the plane more than five feet.  Taylor Aircraft soon filed for bankruptcy, and Piper purchased the company in 1931 for $761, assuming the position of secretary-treasurer and keeping Gilbert Taylor in the role of president.  Under the direction of a 19-year old designer, Walter Jamouneau, the company revamped and reintroduced the lightweight aircraft as the Taylor J-2 Cub while Taylor was on sick leave.  Taylor hated the changes, firing Jamouneau on the spot.  Piper, however, had authorized the changes and hired him back, instead buying out Taylor’s share in the company.  Sales of the Taylor J-2 Cub were initially slow, and a fire at the Piper factory in 1938 ended production.  Piper moved the company to Lock Haven, Pa., and the Piper J-3, featuring additional changes by Jamouneau, replaced the J-2.

The Piper J-3 became the primary trainer for the Civilian Pilot Training Program, designed to train pilots for possible entry into war effort in Europe.  In fact, by the end of the war, 80 percent of all military pilots received their initial flight training in the Piper Cub.  First lady Eleanor Roosevelt helped promote the Civilian Pilot Training Program by flying in a Piper Cub and posing for a series of publicity photos.  There are many photos of World War II leaders, including Gens. Dwight D. Eisenhower, George Patton and George Marshall, flying around European battlefields in these lightweight aircraft.

Today, modernized versions of the Piper J-3 Cub are produced by Cub Crafters of Washington and by American Legend Aircraft in Texas, as the lightweight aircraft continues to be popular among bush pilots.  Original versions of the Cub are still flying as well.  Because original versions of the plane have no electrics, some pilots have difficulty finding airports that can accommodate such planes.  The plane also fills with fuel similar to the way an automobile fills, so gas tanks must be fitted with fuel nozzles that allow for that type of fueling.

From a unique beginning to extensive training of military pilots during World War II, the Piper J-3 Cub is one of the most popular lightweight aircraft in existence.  In fact, the plane is so popular among radio-controlled aircraft hobbyists, manufacturers of remote-controlled airplane supplies produce Cub Yellow shrinkable iron-on covering film and fabrics regularly.

Visit us at www.covingtonaircraft.com for more information about radial and turbine engine overhauls, maintenance, and repair.  You can also find us on Facebook andLinkedin.