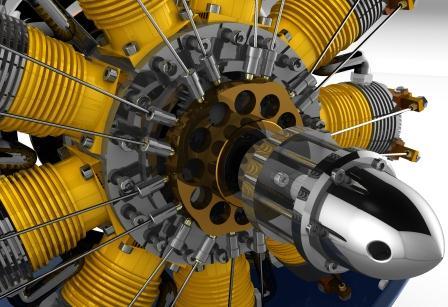 A piston is part of reciprocating engines whose purpose is to transfer force from expanding gas in the cylinder to the crankshaft, according to aircraft engine maintenance experts.  In steam and internal combustion engines, valves are necessary to control the entry and exit of gasses at the proper time in the piston’s cycle.  There are several different types of valves found in aircraft engines.

Also known as a mushroom valve, poppet valves control the timing and quantity of fuel flow into an engine.  Poppet valves, which get their name from the French word “poupette,” meaning youth or doll, operate much like a marionette as they move in response to remote motion transmitted from the engine.  Instead of sliding or rocking over a seat to uncover a port in the manner of sleeve valves, the poppet valve lifts in a movement perpendicular to the port.  Because there is no movement on the seat, there is no need for lubrication.  However, in the early days of using poppet valves, aircraft engine maintenance was increased as poppet valves needed to be re-ground every two years or so as the metals used at the time were not as durable as today’s metals.  Today, most poppet valves are made of stainless steel, and re-grinding is not necessary as part of aircraft engine maintenance.