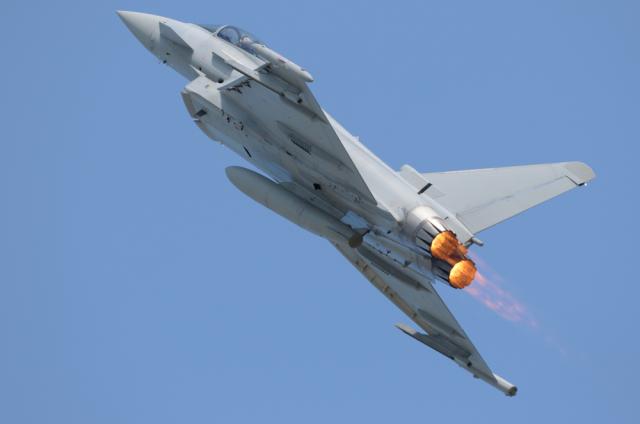 The Eurofighter Typhoon, among the world’s most advanced new generation combat aircraft, offers a careful attention to design, requires minimal aircraft engine repair, and is Europe’s largest military collaborative program.  The twin-engine canard-delta wing, multirole fighter is created by a trio of companies—EADS, Alenia Aeronautica and BAE Systems—acting under one holding company, Eurofighter GmbH, formed in 1986.  Covington Aircraft, a leader in aircraft engine maintenance, offers insight into this magnificent plane.

History of the Eurofighter

As early as 1971, the United Kingdom identified a need for a new fighter aircraft. The initial design, known as the P.96, met the requirements of the UK, and was very similar to the McDonnell Douglas F/A-18 Hornet.  Due to the popularity of the Hornet, the P.96 showed little room for growth or the possibility of an export market.

However, West Germany, which also had a need for a new fighter plane, developed the TKF-90, which was a cranked delta wing with forward canard controls.  The British agreed to the overall configuration and entered into an agreement with Messerschmitt-Bolkow-Blohm (MBB) and British Aerospace to develop a plane that, at the time, was called the European Combat Aircraft.  In 1979, the Eurofighter name was attached to the aircraft.  There was significant political turmoil regarding the plane, as various countries demanded specific options, including radar selection and carrier capabilities.   The maiden flight of the aircraft took place in Bavaria on March 27, 1994, flown by Chief Test Pilot Peter Weger.  The United Kingdom, Germany, Italy and Spain procured orders for the plane, beginning in 1998, and on Aug. 4, 2003, Germany accepted the first Eurofighter.

The Eurofighter Typhoon, with its relaxed stability and design, operates with agility at both supersonic and low speeds.  The plane features a glass cockpit with three full-color multifunction, head-down displays.  User needs were given high priority in the design of the cockpit as feedback from military pilots and specialists at the testing facility helped create the layout and functionality.  The aircraft provides a Flight Control System that allows for rapid and automatic recovery with the press of a button should a pilot become disoriented.  The plane offers voice control and a search and track system superior to many other fighter planes.

Like most fighter planes, the Eurofighter Typhoon has aircraft engine maintenance requirements.  In 2011, a Typhoon sustained extensive damage during landing when the landing gear did not deploy.  The accident was deemed to be pilot error, but the National Audit Office observed that this incident happened at a time when a shortage of parts existed, mostly due to limited distribution of parts from several European countries.  This resulted in longer than average aircraft engine repair times.  These issues have since been resolved, and the Eurofighter Typhoon, according to aviation mechanics, has similar maintenance and repair instances as other planes.

Visit us at www.covingtonaircraft.com for more information about radial and turbine engine overhauls, maintenance, and repair.  Learn more about aircraft engine repair by finding us on Facebook and LinkedIn.