The Spitfire pilot flies a very similar plane to the Hawker Hurricane, even though the aircraft were built by different companies.  The Spitfire, designed with a focus on the highest technology available at the time, was designed by R.J. Mitchell, chief designer at Supermarine Aviation Works, a subsidiary of Vickers-Armstrong. The Spitfire’s inaugural flight took place in March 1936, and was introduced into the Royal Air Force in 1938.  The Hawker Hurricane, built by Hawker Aircraft, flew its first flight in November 1935, and was introduced into the Royal Air Force in 1937.  Although the Hurricane became renowned during the Battle of Britain and accounted for 60 percent of the Royal Air Force air victories in that battle, the Spitfire is a more well-known aircraft. 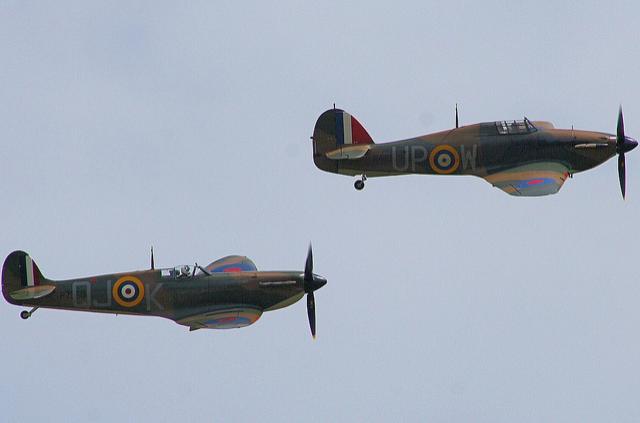 During the Battle of Britain, Spitfire pilots were renowned for defending Britain against the Luftwaffe, with the Spitfire intercepting German fighters, while the Hurricane concentrated on the bombers.  The Hurricanes, considered the workhorse of the RAF, executed corkscrew dive maneuvers which the German planes found difficult to counter.  The Spitfire pilot, due to the plane’s thin cross-section elliptical wing, could fly at higher speeds than the Hurricane, allowing it to maneuver deftly against German fighter planes.

One benefit the Hurricane had over the Spitfire was that the Hurricane had a wooden rear frame covered in fabric, making it easier to repair than the all-metal Spitfire.  Guns in the Spitfire were further apart, and the guns placed toward the tips of the wings occasionally caused balance problems when fired.  Spitfire pilots also stated that it was harder to see the ground from the cockpit due to the plane’s long, straight nose, while the curved nose of the Hurricane made it easier to see the ground in front of the plane.  The Spitfire was retired in 1961 to the dismay of many Spitfire pilots.

The Spitfire and the Hawker Hurricane were excellent fighter planes during their time.  For more information on these aviation marvels, visit Covington Aircraft.