During World War II, the popularity of flying boats increased, as the seaplanes could land on water and land, allowing military branches to deliver cargo or personnel in areas where they otherwise could not.  Although some of the last flying boats were designed for military use, the era of the seaplane ended after the Second World War. 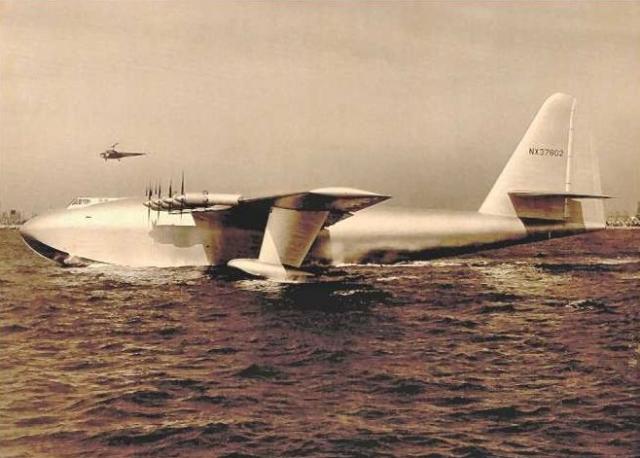 One of the most famous flying boats in history is the Hughes HK-1 Hercules.  More commonly known as Howard Hughes’ famous “Spruce Goose,” the plane was originally designed as a cargo and troop carrier, made of wood rather than metal, to avoid using critical wartime materials.  The plane was nicknamed the “Spruce Goose” after a U.S. senator called the plane a “flying lumberyard.”

Conceived by Henry J. Kaiser, a steelmaker and shipbuilder, this plane was designed and built by Howard Hughes and his staff.  Though this plane was three times larger than the largest plane built before it, Hughes continued to meddle with the design, making the plane more complicated and delaying the process.  Kaiser dropped out of the project, while Hughes continued to work on the flying boat which eventually cost the U.S. government $22 million and Hughes himself $18 million.

On November 2, 1947, the Hughes HK-1 Hercules took its first and only flight with Hughes at the controls.  The plane flew one mile in less than one minute, 33 feet off the surface of the Los Angeles Harbor at 80 miles per hour before making a perfect landing.  The plane returned to its specially designed harbor, and maintained in flight-ready condition until Howard Hughes died in 1976.  Donated to the Aero Club of Southern California, the plane is now on display in a specially constructed facility at the Evergreen Aviation Educational Center in McMinnville, Oregon.

One of the last flying boats developed was the Saunders-Roe Princess, at the request of the British Ministry of Supply, which wanted a long-range civil flying boat for British Overseas Airways Corporation (BOAC) in 1945.  In 1951, BOAC determined it had no need for the Princess, but construction of the aircraft continued as it would be used to transport aircraft for the Royal Air Force.  Of the three aircraft requested, only one of the flying boats flew, on August 22, 1952.  Production was terminated, and, although Aquila Airways offered £1 million for each of the Princess flying boats in 1954, Saunders-Roe rejected the offer and the three aircraft were cocooned in hopes a buyer would be found.  In 1964, the flying boats were finally purchased by Eoin Mekie for Aero Spacelines for use as heavy-duty freight aircraft for transporting rocket components.  However, when the cocooning was removed, the airframes were badly deteriorated as the maintenance and inspection of the stored aircraft had been allowed to lapse.  All three planes were broken up by 1967.

End of an Era

The flying boat era came after World War II.  Because flying boats were designed to meet landing requirements where runways were not long enough for larger airlines, the need for seaplanes was drastically reduced after runway improvements at most airlines.  In addition, navigation aids on regular planes were minimal, making it difficult for planes to land in crosswinds.  Aviators also found that after World War II, long runways on ex-military bases and the many surplus planes available from the military made the need for flying boats unnecessary.

For more information on seaplanes, or to learn more about the engine repair services we can provide for your aircraft, call Covington Aircraft at (918) 756-8320.  You can also join us on LinkedIn and Twitter.

One thought on “History of the Flying Boat – Part Six”